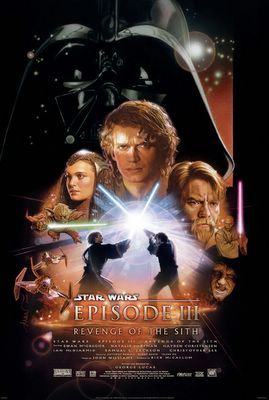 My nephew and I went to see "Star Wars III: Revenge Of The Sith" this weekend - at the Wave Multiplex in Gomti Nagar, Lucknow. I was in a movie hall after a really long time (the last one was - strangely enough - Star Wars II: Attack Of The Clones at the Odeon Multiplex in Leicester Square, London). And the combination of a dark, cool room plus the movie failed to put me to sleep (unlike many previous occasions, including the last visit). I am not a Star Wars buff: like many others, I have enjoyed the story that M/s Lucas & Co have unfolded over almost 30 years and I agree that he's done a very fine job in telling it but I have serious doubts about qualifications such as "a dominant fact of our collective cultural life for nearly 30 years" (Some Surprises in That Galaxy Far, Far Away; A. O. Scott; New York Times; Movie review - see here (registration needed)) for the double-trilogy.

Most people (read: "people-like-us") of my generation - even in India - will have their personal Star Wars story - so do I. Star Wars (or, as it is known now, Star Wars IV: A New Hope) was the first English movie (in reality, I couldn't understand most of the language and any of the accent then) that I was taken for (in 1978 - I think) in the newly constructed Mona cinema (Air Conditioned) in Patna. I wasn't yet 7 years old but do remember most of the experience (and almost none of the movie - except as below): the air-conditioning was a huge deal, of course; so were the plush - by the definitions of those days - seats (dark red, rexine covers), the small popcorn machine (yes, yes - they're in every department store from Saharanpur to Siliguri now but back then, it was a novelty in Patna: imagine, something to eat being prepared so quickly in a glass fronted machine - and so expensive, my God). In between all this, I also managed to watch the movie (my cinema hall narcolepsy yet to strike) and understand some of it. Even though it has been 25+ years, I remember the scroll with which the movie begins, the last battle for (on? with?) the Death Star, Darth Vader's helmet filling the screen, his wheezing speech and some other fragments from the movie. Quite an experience, it was - as Yoda would say.

I missed the next two movies - there was lots happening on the home front around 1980-81 when The Empire Strikes Back came out and going to the sequel didn't ever make it to the to-do list. By 1983-84, when Return of the Jedi hit the screens, I boxed it into the "for kids" category - a kiss of death as far as my participation was concerned (small towns and large families make the eldest child grow up quicker, I have noticed). However, when the series was resurrected in 1999, I was more "settled" in life - and had a nephew of the right age who I was keen to show things that were cool (unknown variable back then) in our times (even if I was to experience them for the first time myself). So we saw The Phantom Menace - which was a bit of a let down (this really is kid-stuff what with the pod racing and all, where's the story?), and Attack of The Clones - where I dozed off (too many long shots of rank-and-file clones in the army) but, all through, I think the realization that these were parts of a larger, more interesting story persisted.

In Revenge of The Sith, I am happy to report, that faith has been vindicated. Oh, yes, it suffers from some obvious - and huge - faults: grossly juvenile acting in parts (Mr. Christensen and Ms. Portman try to be affectionate in an important sequence and fail miserably), the end is too abrupt (Darth Vader's torment at not getting the prize promised to him in his Faustian bargain with Emperor Palpatine is given short shrift) while the sequence leading up to the end isn't (the fight between Obi-wan and Anakin on the volcanic planet is drawn out much more than it deserved), and (I can't blame Mr. Lucas for this one, though) the projection-room technician at Wave Multiplex sacrificed a few important minutes of the movie (where Anakin cuts off Mace Windu's hands) so that we would go buy Pepsi and popcorn ("Intermission"). Keeping such jarring notes aside, the movie is a winner - like Senator Goldwater's handlers asked reporters to do, we should focus on "what he means, not what he says". The torment of a young achiever as elders of the council refuse to grant him an equal place; placing personal love over ideals and duty to the greater good; being tricked by the temptations held out by a fraudster; the pride in - and doubts about - an apprentice; coming up short in key skills - which you're known for - at the moment of truth; protectors becoming predators in the blink of an eye; the terrors from our childhood that stay with us through our life: these are grand themes and they have all been handled well in this story. I quite enjoyed the entire movie and will endorse it to all ages - as long as there's some idea of what comes before (and what has already come after) this episode.

And, one final note - if rumors are to be believed, the "original plot" and the "unedited version" of Star Wars III: Revenge of the Sith is much darker and complicated story than the one that has been released (marketing-types wanting to "broaden the appeal" are the culprits, it seems). Should this indeed be the case, I will be front in the line when the Director's cut is released. Till then, Go into exile (on this topic) I must.

N.b. The "Dear Diary" series on Saara Aakash is unlike other postings - which relate more to "high-impact issues" of governance, politics and economics. These entries are more personal accounts - on many occasions, on happenings of only incidental importance - which may be of lesser interest to most others. I will keep such postings separate under the "Dear Diary" sub-heading and should you be one of the "most others", please ignore these.
Posted by Nikhil Prasad Ojha at 2:42 PM

Nice to see you blogging. never knew u could write so well :)

Powerful, powerful stuff. I am a Star Wars believer once more. Worth yet another viewing (always in digital projection), and I hope you're right about the director's cut.