Over the last 5 years, our political landscape was fairly stable – and so was the formula for the governing coalition: a strong center, with a sizeable entity to its left (communists or samajwadi) plus handful of smaller allies, all more flexible and mostly more left-leaning in persuasion. 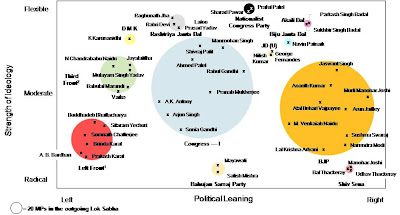 How will this look going forward? We’ll know for certain only once the dust settles but there are enough indicators to put some stakes in the ground.

First, a wholesale drift towards a more centrist and flexible stance is already evident – rarely before have we seen such public declarations of promiscuous desires. Congress-I and BJP are both clearly open for business with all comers. This drift is not just demand-led: smaller parties have jettisoned all baggage of their origins (NCP, the anti-“foreigner” anti-BJP option, Samajwadi party as the “secular” non-Congress alternative) and are racing each other to flexible centrist positions, maximizing option value. BJD climbed the fence immediately before the elections, JD(U) protests too much in underlining its fidelity towards the NDA, and others (AIADMK, Trinamool) have let their silence speak for them. Even the left is now open to a rapprochement, realizing that what they did last summer has outlived its usefulness.

Second, smaller supporters are likely to carry more bargaining power than in previous coalitions. Even though their Prime Ministerial dreams won’t fade away, these are unlikely to be realized for most of them in this round. It is also difficult to see any one of the supporting parties becoming as sizeable a block by itself as the Communists were in the first 4 years of the outgoing regime. So the ruling coalition will likely comprise more number of smaller supporters. This doesn’t bode well for the processes at key economic ministries – imagine a few years with not one telecom ministry but many such sectors where ministerial appointments or policy announcements are first made by the regional satrap and the Prime Minister’s job is to acquiesce.

Next, the relevance of ‘strong independents’ is now behind us. Not the Page 3 contenders, who will go back to their day-jobs once the television spotlight shifts, but loners and party rebels of different hues who would contest and win. This consolidation within the fragments is not just an outcome of the rising ‘price of entry’ – cost of a credible candidature – but also of increasing elasticity of affiliations in leaders and parties. Mr. Sadhu Yadav does not need to be a rebel independent candidate, there’s someone already willing to take him in. George Fernandes, undoubtedly the most politically relevant non-party contender, is unlikely to win.

All this comes together in what is euphemistically labeled “lack of issues”. In their desire for flexibility, no one has really championed major issues. The UPA had many credible and creditable wins (e.g. NREGA) which it failed to project sufficiently; BJP was strangely subdued in supporting their “strong leader” message when challenged (surprisingly and with more spirit than substance) by Dr. Manmohan Singh; SP leaders didn’t bother reading their manifesto; and the BSP did better – they didn’t issue one.

If anything, this is the single biggest strategic shortcoming of any party, and certainly of Congress-I and BJP. There are issues aplenty: national security, poverty, the specter of demographic dividend becoming a drag in the absence of job opportunities for youth – it is a long list on which one of them can take the high-ground, present a coherent message of how they intend to achieve the desired outcome and then message it repeatedly to the electorate. The timing of these elections weren’t a surprise to anyone – so there’s no excuse for not doing adequate homework on resonance with different electorates and then going hammer and tongs using targeted media.

The commoditization of positions - which is what a centrist, flexible drift implies - will hurt major parties disproportionately - and for their long-term interests, they need to carve out distinct positions on key issues. It is also what is needed to present informed citizens with true choice among those who wish to govern.

You express joy at even more bargaining options being made available by the multitude of players which I agree with. I also think this increased complexity is what the legendary aam-aadmi (and other fruity characters) dreads. Without making the first effort at understanding, he presumes that complexity means less comprehensibility and all the other ills that may follow. Building trust across such a chasm will remain an ongoing issue no matter what the results.

hoping for anti-politician riots within the decade ..

you are way too respectful

Hi Nikhil,
I like your commentary. Though you advocate that the mainstream political parties should take distinct positions on key issues, I wonder whether that was ever their reason for existence or they really see any material value coming out of it. I mean what position due to expect the JMMs and the NCPs of the world to take on any key issue when their sole reason for existence is to get into power somehow. For them, taking a clear position could actually become a problem as it would limit their flexibility to alingn with anyone who serves their personal gains.