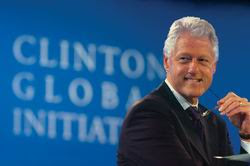 One Indian name high up on the Clinton Foundation Donor List is a certain Amar Singh. He's second only to Laxmi Niwas Mittal among desi donors (and very much in the group that gave between $ 1mm - $ 5mm).
What are the odds that it isn't the Hon' MP Mr. Amar Singh (Samajwadi Party, Rajya Sabha) but some other Amar Singh? I couldn't find the full list (which will have some more details than the NYT summary, I trust) on the Clinton Foundation website - there's a press release that says it has been put up.
Even in these depressed times, LNM's net worth is well into double-digit billions. But what about Mr. Singh? If it is the socialist socialite, a  report in Indian Express (7 Nov 08) says he has declared owning movable and immovable assets worth Rs. 37 crore (no mean sum, right, but the cash in hand and bank deposits within this are about Rs. 5.7 crore - for him and Mrs. Singh together). At these levels, it takes a large heart to give away $1mm (at least Rs. 4 crore).
Of course, it's his money, he can do what he likes with it - but as a person in public life in India, it is a worthwhile question to ask how this compares to help he's provided charities closer home.
Maybe it wasn't charity at all - he could have just been buying a celebrity visitor.
Has someone else - any one of Mr. Singh's wealthy friends (wealthier, actually, he's not in the poor house himself) donated on his behalf? What sort of disclosure norms should we expect from our politicians? As a MP, he's already a public servant - and somewhat more influential than the average member, if one believes half of what is written.
Enough. For more, tune into the main stream media, which should pick it up in due course. And then proceed to make a complete hash of the issue.
Posted by Nikhil Prasad Ojha at 12:00 PM